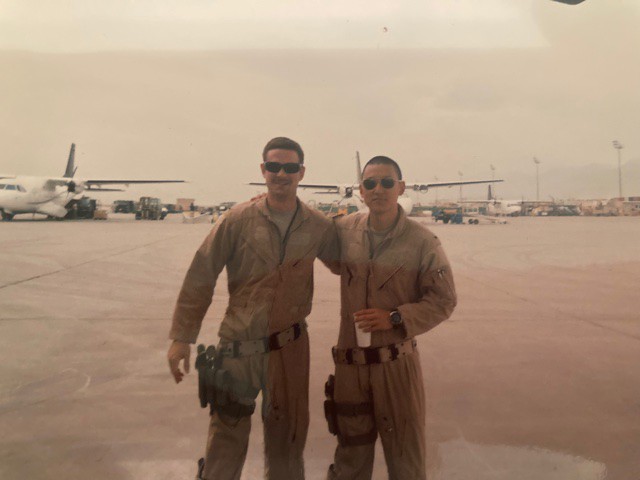 “I bore witness to the untold sacrifices of amazing men and women, and now I struggle with whether any of it mattered”

Today, I won’t opine about whom to blame — plenty have. Nor will I discuss the consequences of our withdrawal for the Afghan people — plenty should. No, as the twentieth anniversary of America’s longest war approaches, and as the world watches the Taliban seize control over Afghanistan, I find myself thinking about the people I deployed with, again and again.

At times, there can be an odd bystander feel to being an Air Force Intelligence Officer to a combat search and rescue unit. On the one hand, you’re tasked with keeping some of the US’ most highly trained aircrew and operators alive; on the other hand, they’re kitted out and taking off into harm’s way while you stay on base, waiting for them to return. In short, you’re not a badass; you’re badass-adjacent. From my dusty corner in a tent in Helmand, I worked alongside them — those brave and bright Airmen — in what was, and is, the greatest honor of my life.

Not too long after the initial invasion, HH-60 helicopters and pararescuemen deployed to Afghanistan to rescue pilots who crashed or were shot down. That mission quickly expanded to include casualty evacuation, or the pickup of wounded troops in often-contested landing zones. In 2010, the third leg of the rescue triad — the fixed-wing HC-130 — finally arrived, enabling quick rescues from the chalky deserts of Kandahar to the snow-capped peaks of Parwan. Over several months, three families worked together to save dozens of lives — Americans, Brits, and Afghans.

However, on June 9 2010, one HH-60, call sign PEDRO66, came under fire near FOB Jackson and crashed. Of the seven men onboard, 1LT Joel Gentz, TSgt Michael Flores, SSgt David Smith, and SrA Benjamin White died on impact. PEDRO67 rescued the other three and returned to base, transloading them onto an engines-running HC-130 to be taken to higher-level care. Unfortunately, Capt David Wisniewski did not recover from his injuries, though Capt Anthony Simone and MSgt Christopher Aguilera thankfully survived.

When we eventually returned stateside, rumors quickly began to percolate that we’d have to prepare for deployment yet again. Rescue was a “high-demand, low-density” capability, which meant we deployed frequently. And yet, less than a year removed from tragedy, and mere months after returning home, the commander had to choose between too many volunteers. On June 9, 2011, we memorialized the one-year anniversary of the PEDRO66 crash, back in Helmand, on the same base and out of the same tents.

We didn’t just lose our brothers in Afghanistan, we lost comrades here too. We missed anniversaries and births. We got divorced or stopped recognizing our children as they grew up in our absence. Maybe we still can’t find a civilian job that makes us feel fulfilled. So yes, I’m torn, sad, and angry, but I’m all these things because I bore witness to the untold sacrifices of amazing men and women, and now I struggle with whether any of it mattered. To other service members and veterans feeling the same way today, I — we — see you. If you’re in pain, you don’t have to suffer alone.1 Others forgot, but we did not, because we deployed with you. You watched our backs as we watched yours, and that — in and of itself — mattered. Serving with you was the greatest honor of our lives.

James Cho (@otherjamescho) is a 2021 Defense Council member and currently Counsel for the Senate Veterans Affairs Committee. James is also a Lieutenant Colonel in the Air National Guard and served in Combat Search and Rescue units from 2008–2018, deploying twice to Afghanistan, twice to the Horn of Africa, and once to Iraq.

Next
“I was a true believer. I genuinely thought what I was doing would help secure democracy in Afghanistan.”
“This war, and the chaotic withdrawal, has created a mental health crisis.”