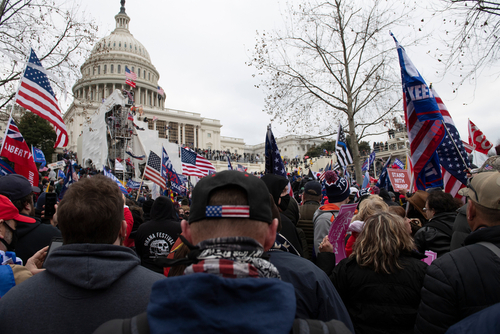 There is a heightened awareness, but the threat remains the same as we mark one year since the January 6, 2021 attack.

‍On the first anniversary of the January 6th insurrection on the capital, it is being remembered as one of those moments in history that is etched in the fabric of our collective memory. Our nation was shaken after watching the events unfold.

On that day, the United States Congress was in the process of certifying the 2020 election results. What we saw take place by those that gathered at the capital was mayhem and clear political violence - resulting in hundreds of arrests for those that broke windows, fought with police, and caused the deaths of 5 individuals.

Many domestic extremist groups applauded the events of the January 6th insurrection, even in the face of public scrutiny and outcry in the months that followed. These groups and their supporters have evolved and adapted their strategies since January 6, 2021 - their messaging, and even their infrastructure has changed. There has been an adoption of newer offline methods, even decentralizing their organizations to avoid further scrutiny. New technology platforms have arisen, being used as alternative ways to communicate their hateful rhetoric.

We’ve also seen more of their narrative being etched into mainstream online discourse, whether it be through fighting political action at the local level or an attempt to legitimize themselves into the political dialogue.

This morphing and changing of strategies by extremist movements is not new - we’ve seen this with foreign terrorist organizations all around the world as well. ISIS moved away from the cell based attacks that Al Qaeda frequently used, and into the lone wolf model which can be harder to prevent. The key - is how law enforcement and the federal government’s policies and tactics can swiftly keep up with the ever changing threat posed by these organizations. This has to be done in a quick and efficient manner in order to combat extremists of all kinds.

While there was an initial pause after the events unfolded on January 6th, domestic extremist groups are alive and well. There still remains a deep underbelly of support and loyalty as these groups rebrand and re-strategize, whether individuals are attaching themselves to a particular organization or not. These movements and the threats they pose to society are still immediate and need to be thwarted.

There are reasons for hope though. The Biden administration has taken this threat seriously, having spent it’s first year of the administration establishing the country’s first National Strategy for Countering Domestic Terrorism. Since the attack, public officials and our nation’s law enforcement have repeatedly cautioned the need for vigilance in confronting domestic extremism. It is one of the largest threats to our national security today.

There is a heightened awareness, but the threat remains the same as we mark one year since the January 6, 2021 attack. We must confront domestic extremism - and remain vigilant as we fight this threat at the national and local level.

Next
Juneteenth teaches us that we must keeping fighting
What Are We Celebrating When We Commemorate Juneteenth?