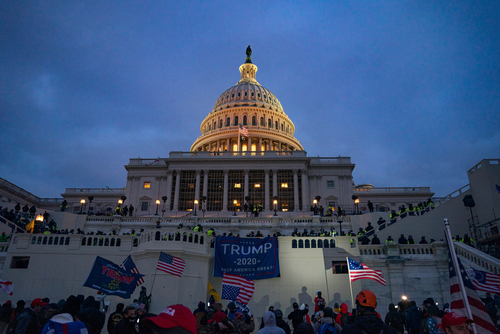 As We Mark One Year Since the Insurrection, We Must Be Clear Eyed About the Dire Threats We Face

January 6th made many Americans painfully aware of the threat of domestic extremism. But it was simply the manifestation of a crisis -- a crisis that has only gotten worse in the 12 months since.

In many ways, the cycle of extremism has been obvious over the last few years: Charlottesville, Pittsburgh, El Paso, the Capitol, all events that have captured the nation’s attention. But this extremism has increasingly seeped into the mainstream of our society -- from Replacement Theory and other conspiracies on primetime TV and espoused by politicians; to attacks on education, election, and public health officials; to record-level hate crimes on our streets.

All of this is reinforced by new polling that illustrates the erosion of our democratic norms: Roughly one in three Americans believe violence against the government can at times be justified -- no doubt the result of years of readily available disinformation, propaganda, and hate. It’s understandable to feel hopeless about the future of our democracy.

But there are, in fact, reasons for hope. Integrity First for America, in partnership with a world-class legal team, brought a landmark lawsuit against the neo-Nazis, white supremacists, and hate groups responsible for the Charlottesville violence. And in late November, after an intense and illuminating four-week trial, the jury returned a verdict in our plaintiffs’ favor, finding the defendants liable for multi-million dollar damages -- and making clear that there will be serious consequences for violent extremism.

Now, officials and organizations are bringing new lawsuits modeled on our Charlottesville case, aimed at holding accountable those responsible for the Capitol insurrection. Just a few weeks ago, the DC Attorney General filed suit against the Proud Boys, Oath Keepers, and a number of individual extremists, highlighting IFA’s case as creating “momentum” in this legal fight.

We’re enormously proud that our Charlottesville case has affirmed the importance of civil litigation and helped chart a path forward, demonstrating how to bankrupt and dismantle these extremists -- and prevent them from striking again. And as extremism becomes increasingly mainstreamed, it makes this accountability all the more crucial.

These cases don't happen on their own -- they take courageous plaintiffs and tireless work -- and they’re not a silver bullet. Saving our democracy will require a whole-of-society approach, from truly combatting disinformation and investing in resilience to protecting voting rights. But civil litigation is a crucial tool in the toolbox at a moment when it's desperately needed.

As we mark one year since the insurrection, we must be clear eyed about the dire threats we face -- and use every possible tool to combat them. It’s never been more urgent.

Next
There is a heightened awareness, but the threat remains the same as we mark one year since the January 6, 2021 attack.
GOP Refusal to Confirm Dilawar Syed For His Faith Is An Attack on American Democracy